Brief History of the Rocks and the Holy Monasteries of Meteora

It’s been about a thousand years since historians and geologists have started to study the creation of these rocks, expressing various theories. The prevailing theory is that of the German geologist Philipson, who came to Greece in the late 19th century. According to his theory, a large river had its estuary in this area that was covered by deep and narrow sea for millions of years. In the river mouth various materials and stones were transferred by the water from the Northern parts of primordial central Europe. From the accumulation of these materials delta-shaped cones were formed.

25 to 30 million years ago, after a series of geological changes that took place through the centuries, the central part of present-day Greece was elevated and the region of Thessaly was sunk entirely, allowing for the formation of a lake. Later on, the vale of Tempi was formed, which facilitated the pouring of the waters into the Aegean sea. Thus was the plain of Thessaly revealed.

During the Tertiary period, when the Alpian orogenies were taking place, blocks of rocks were cut off from the Pindos mountain range and the valley of the Pinios River was formed between them.

With the continuous erosions by the wind, the rain, and other geological changes, these rocks took their current shape after millions of years. In the cavities of the rocks, their fissures, and on their peaks the locals sought protection from the raids of various conquerors and by-passers. 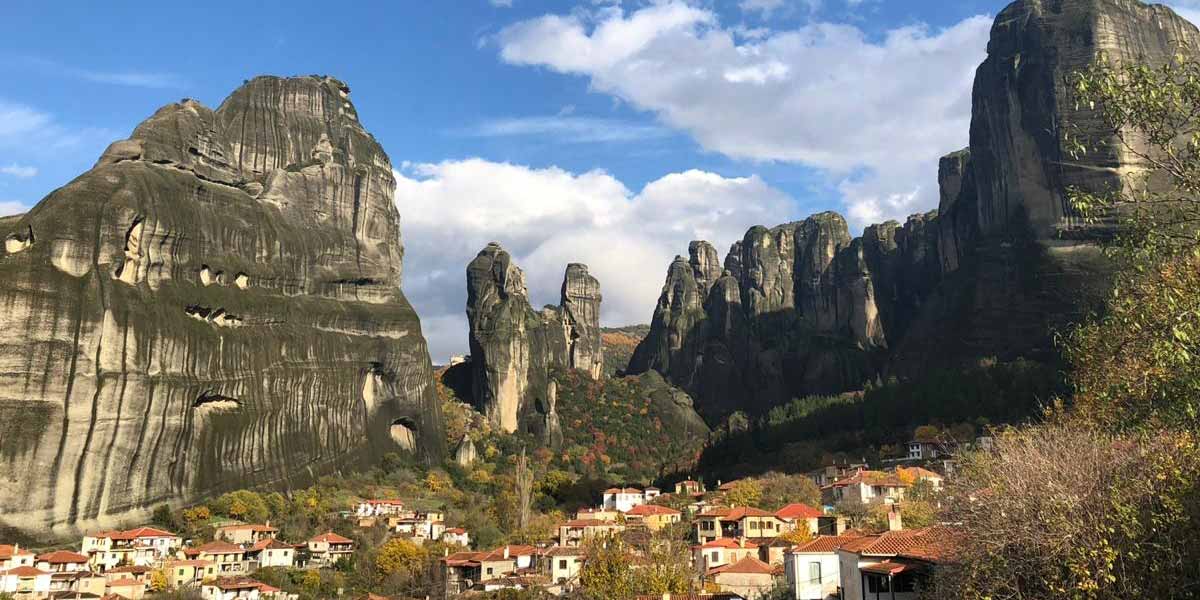 In these rocks plenty of brave hermits also found refuge, seeking spiritual calmness and peace of mind, while aiming at Christian perfection through their prayers. In the beginning those hermits prayed in isolation in small chapels, the so-called “prosefhadia” (=places for praying), not only for their own salvation but for the salvation of all people. They led an austere life and worked arduously.

It remains unknown when the rocks were inhabited but, according to existing scripts, monastic life appeared after it had been set up. Byzantinologists claim that the first hermits must have taken to the rocks around the end of the first millennium. The first hermit mentioned is Varnavas (around 950-970 AD), who founded the cave-chapel of Ayio Pnevma (The Holy Spirit) , followed by the foundation of the cloister of the Transfiguration of Jesus by the Cretan monk Andronikos in the beginning of 1000 AD. Later on, around 1150-1160 AD, the cloister of Stayi or Doupiani was founded.

Apart from the aforementioned hermitages there were others built in various caves around the rock of Doupiani, the rock of the Holy Spirit and the one of “Sourloti”. In the beginning of the 12th century a small hermitage community was set up in the area of Meteora, centered around the chapel of Theotokos, called the “Kyriako” or the “Protato” (first). This chapel has been preserved until our days and is found on the south of the Doupiani rock. In this small chapel hermits met to join their prayers to God, to discuss their problems and to seek each other’s advice on issues related to their hermitages. The head of the Skete of Doupiani or the Skete of Stayi held the title of the “First” as well as that of the “leading man” of the Monastery of Theotokos of Doupiani.